Bilfinger delivers a range of engineering services for the Porthos project in the port of Rotterdam on behalf of several customers. The project is considered one of the world’s largest and most advanced carbon capture and storage (CCS) initiatives. Bilfinger’s services include design and planning work to connect industrial companies to the CO2 pipelines as well as detailed engineering for buildings at the compressor station.

“In the years ahead, we will see a kind of carbon value chain emerge,” says Christina Johansson, Bilfinger’s interim CEO and CFO. “That makes our work on the Porthos project strategically important for us. We are positioning ourselves as a partner for CCS projects in the process industry – one that can deliver a range of services along this new value chain from a single source.”

Bilfinger’s involvement in the Porthos project began two years ago and has steadily expanded since then. Among the first tasks was the execution of a process simulation study in which Bilfinger examined the feasibility of various sections of the planned infrastructure. Currently, the engineers are focusing on the detailed design of buildings for the compressor station. It is in this station that the CO2 is compressed before being transported to the North Sea. The Belgian Denys group is selected by Porthos to design and construct the pipeline systems that will transport the CO2 to the compressor station. On behalf of Rotterdam Engineering, who is commissioned by Denys to deliver the design, Bilfinger assists in providing engineering services. Furthermore, Bilfinger executes multiple pipeline projects for Shell as one of the suppliers of CO2 to Porthos. Bilfinger Tebodin will be delivering all these engineering orders. The decisive factor for the orders was the company’s comprehensive expertise in both the handling of CO2 and in engineering pipelines above and below ground.

The project name “Porthos” stands for “Port of Rotterdam CO2 Transport Hub and Offshore Storage”. EBN (Energie Beheer Nederland), Gasunie and the Port of Rotterdam Authority are responsible for project organization. The objective of the project, which is receiving €102 million in funding from the European Union, is to compress around 2.5 million metric tons of CO2 per year in the port of Rotterdam from 2024 and store it in depleted gas fields beneath the North Sea. The CO2 will be supplied by Air Liquide, Air Products, Exxon Mobil and Shell, which will capture it at their industrial facilities near Rotterdam and feed it into a pipeline to the port of Rotterdam. The CO2 will then be fed through a compressor station into an offshore pipeline below the seabed and transported to a platform in the North Sea, located about 20 kilometers offshore. From this platform, the CO2 will be pumped into empty gas fields located in a closed reservoir more than 3 kilometers below the North Sea bed. Work is currently underway to prepare for the implementation of the project, and the final decision and government approval to implement it is planned for 2022.

CCS is one of the most cost-effective ways to achieve targeted climate goals in the short term. The Dutch climate agreement stipulates that half of the industry's targeted CO2 reduction by 2030 should be achieved through CCS. The other half is to be achieved through greater energy efficiency including waste heat utilization, further electrification, the expansion of renewable energies and the increased use of green hydrogen. 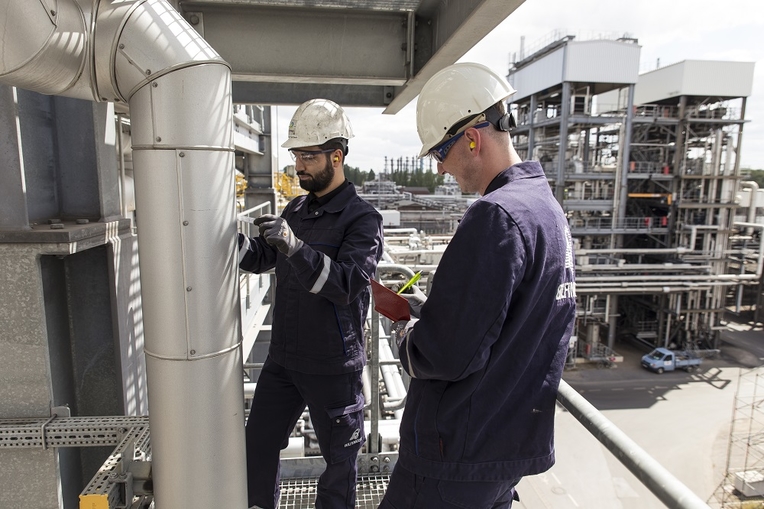